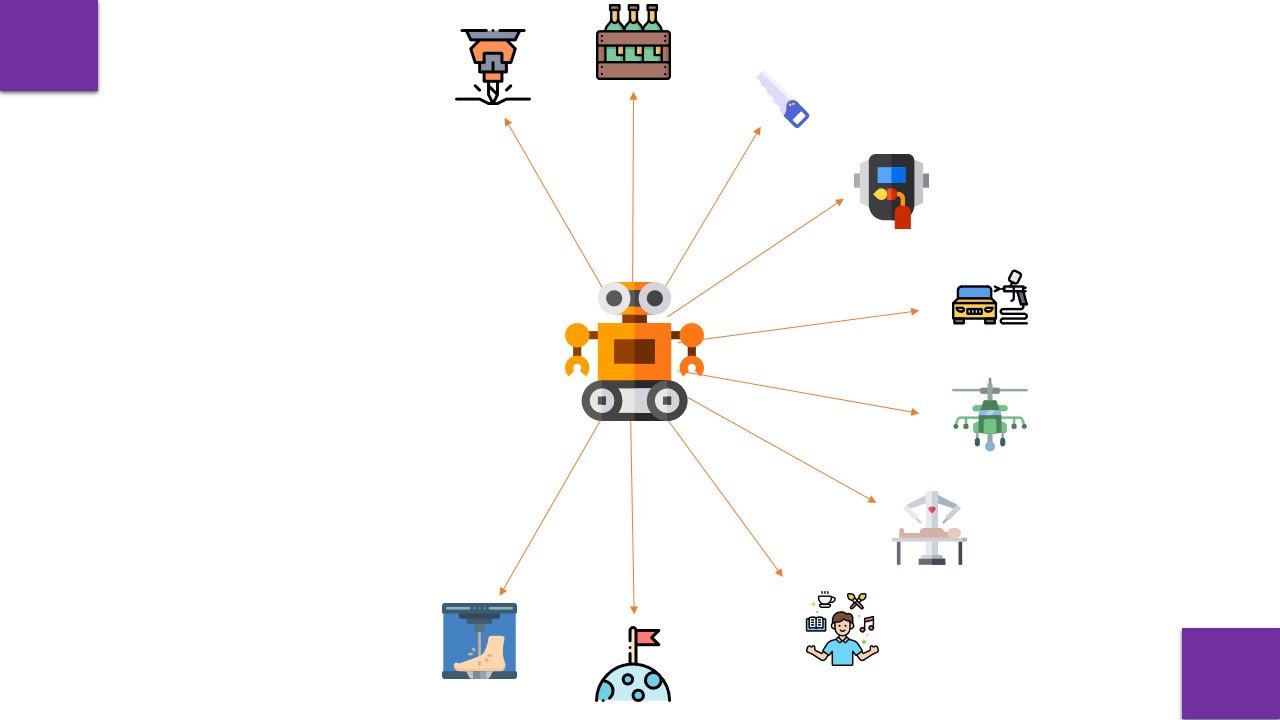 Application Domains set the requirements to drive the development of new innovations with a set of system abilities and functions  which are implemented with the help of advanced technologies. Lets understand each component in detail.

Robotics technology can be deployed in a broad range of distinct application domains, such as Healthcare, Manufacturing, Agriculture, Consumer Applications, Logistic and Transport, Civil Applications, Commercial Projects and many more where each domain is a cluster of many sub-domains with their own needs and requirements.

watch a video how robotic exoskeletons are useful for paralyzed people

Second is manufacturing, in this sector applications of robotics technology are developing dynamically. Industrial Robotics is a fast developing subdomain under this sector. Some key market sectors under industrial robotics are Electronics assembly ,  Automotive parts manufacturing and automotive assembly ,  General production of metal, rubber or plastic parts and  Food processing.

Third is agriculture, which is further divided into arable farming, livestock farming and special crops. Arable farming is where only crops are grown on a farm, then used or sold by farmers to earn their livelihood. Many autonomous robots are used for industrial farming for example an autonomous agricultural robot bonirob is being developed by Boasch and german company Amazone for weed plucking, that also uses spectral imaging to distinguish green plants from brown soil, and which remembers the location of individual plants and returns repeatedly to each to monitor their growth. Watch a video of it working on the grounds. In other areas such as livestock farming autonomous feeding robots, barn cleaning robots , Milking robots for cows are developed. For autonomous planting, pruning, and harvesting for high value crops specially designed robots are used by farmers. Many of these technologies are used by farmers living in Australia and other developed nations.

The domain can be divided into a number of different sub-domains: • Domestic appliances • Entertainment • Education • Assisted Living. Robotics technology has been applied to domestic appliances for over ten years, starting with pool cleaners, vacuum cleaners and lawn mowers. Under Entertainment industry robotics technology help to create new theme parks with enhanced roller-coaster rides to alleviate visitor experience. In education sectors, learning robotics is very special experience for students. Assisted Living is a challenging domain where robotics technology provides support for independent living at all ages, social innovation & inclusion and ageing. Robots are cute companions to people.

Watch a video of a cute robot named Buddy:

In Logistic and Transport sector autonomous transport is a high profile technology. It is likely that the market impact from this will be incremental as vehicle manufacturers increase the level of automation in products, Within the logistics domain the highest impact of robotics technology is in warehouse based systems especially for order picking and distribution centers and intra-logistics operations in factories and retail.

Commercial sector robotics covers the use of robots and remote guided vehicles in the oil and gas sectors and more recently in mining ,sometimes these sector operate within hazardous environments and the extraction of earth resources is often limited by the level of risk associated with human working conditions, where robotics technology provides the enhanced set of tools which can operate more efficiently in such conditions. Other sector is  utilities industries, power generation, water, gas and electrical supply, that must remain operational 24/7 in order to minimize costs. Robotics technology plays a significant role in providing continuous inspection capabilities that can be extended to both inspection and repair in future.

Robot systems operate through the integration of a wide range of different technologies. In addition to the characterization of each of these technologies it is also important to characterize the overall performance of the system. This set of system abilities capture the important system level performance of robots, Each ability captures one specific aspect of the operation and behavior of a robot system.

Motion ability is further divide into constrained and unconstrained motion.

Decision autonomy is the ability of the robot to act autonomously. Nearly all systems have a degree of autonomy. It ranges from the simple motion of an assembly stopped by a sensor reading, to the ability to be self sufficient in a complex environment.